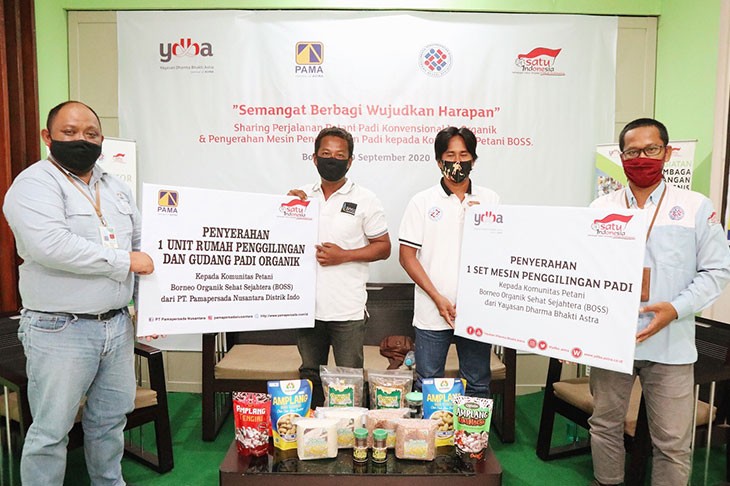 As a form of appreciation for farmers built by Dharma Bhakti Astra Foundation (YDBA) and PT Pamapersada Nusantara (PAMA) who are members of the Healthy Prosperous Organic Borneo Rice Farmers Community (BOSS). On September 30, 2020, YDBA and PAMA handed over rice milling machines and houses to the community in Bontang, Timut Kalimantan. This apresization is an activity of the Spirit of Sharing to Realize the Hopes of YDBA and PAMA, to support business productivity carried out by the BOSS Community. The symbolic handover of the milling machine was given by the Coordinator of the Business Development Institute (LPB) Pama Bessai Berinta, Suryo Aji representing YDBA, while the handover of the milling house was symbolically given by the Dept. Head of CSR PAMA Site of PT Indominco Mandiri, Agung Dwi Ananto Djati represented PAMA to the BOSS Farmer Community Representative, namely the Coordinator for Cultivation, Mus Mulyadi and the Coordinator for Public Relations, Sulaiman.

The milling machines provided by YDBA and the milling houses provided by PAMA can be optimized so that they produce organic rice products as value-added products that can later deliver farmers to become independent and move up the class with their products. Meanwhile, SRGS Division Head of PT Pamapersada Nusantara in his speech said that with this appreciation, it is expected to reduce the costs incurred by farmers who have been paying rent in grinding rice. So that it can provide improvements to the economy of the community, especially farmers who are members of the BOSS Community.