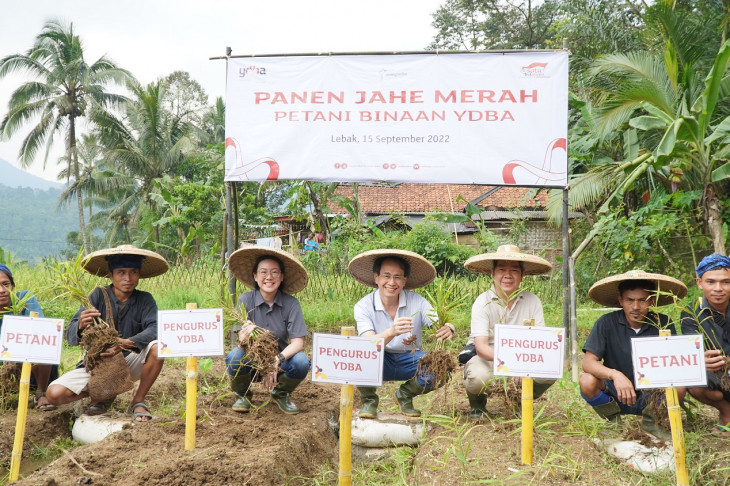 On September 1, 2020, the Dharma Bhakti Astra Foundation (YDBA) together with PT Bintang Toedjoe committed to collaborating to develop red ginger farming in Lebak, Banten. Various coaching programs, both management and technical, have been provided by YDBA and PT Bintang Toedjoe to farmers in Hariang and Kanekes Village, Sobang, Kabupaten Lebak, Banten to produce agricultural products according to high quality, cost & delivery standards PT Bintang Toedjoe was appointed as his Ayah Angkat.

Figures who present at this harvesting activity were the Chairperson of the YDBA Chief Executive, Sigit P. Kumala; YDBA Treasurer, Handoko Pranoto; YDBA staff, Vilia Husin, and assisted farmers from Baduy and non-Baduy.

Sigit P. Kumala in his remarks on the sidelines of this second harvest has appreciated the farmers for the achievement of increased harvests this year. Sigit hopes this great yield can be improved and farmers in Lebak, Banten can also cultivate other products, such as chili and rice, which are much needed by prospective offtakers.

Asrip, a Baduy Luar farmer assisted by YDBA expressed his enthusiasm for participating in the program development of red ginger which has an impact on the amount and quality of ginger produced. Asrip admitted, before participating in the training, the red ginger he produced only reached 2 quintals during the harvest season, now Asrip can produce 2 tons with the appropriate QCD standard determined by Ayah Angkat.

Meanwhile, Rohmat, a non-Baduy farmer assisted by YDBA conveyed that the YDBA development program which he has been following has encouraged Rohmat to be more innovative, one of which is by making simplicia as a derivative product of wet red ginger which is needed by various company. Through these derivative products, Rohmat hopes that the income generated by red ginger farmers in Lebak, Banten can continue to increase.